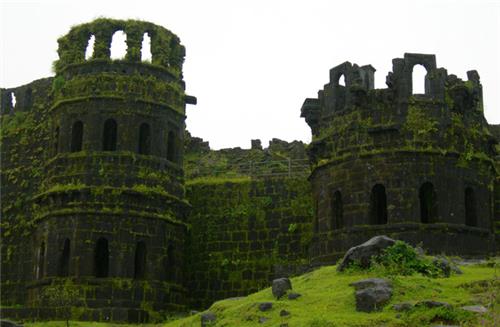 Korlai, a picturesque village of the Raigad district is a must place to visit. The village stands amidst the peaceful nature along with some of its historic relics. The place was a haven of the Portuguese rule during the 16th century, as a token of which Korlai Fort stands in its glory till today. Korlai is about 20 kilo meters away from main Alibag town in Maharashtra.

Korlai is basically a small island connected with the main land from one side with the help of a bridge. The island is plain coastal fishing village with a small hill at the centre. An interesting story surrounds the name of ‘Korlai.’ When this part of the territory was under the Portuguese rule, this island was known as the ‘Morro de Chaul’ which means ‘a small rounded hill’ in Portuguese. Till today the fishing village inhabitants speak in a dialect which is similar to ‘Portuguese Creole’ and local ‘Marathi’ language called ‘Kristi’. The word ‘Creole’ in due course had been distorted to ‘Korlai’, which had become the name of the place along with the fort.

This fort was built by the Portuguese in 1521 under the permission of Sultanate of Ahmednagar, as an additional refuge along with the fort of Chaul, to safeguard the sea way towards Revdanda Creek from any other foreign invasion. The Portuguese built this fort as a strategic decision to defend their rule from Bassein to Korlai. The fort is positioned near the Korlai village on the small hilltop of ‘Morro de Chaul’ and was originally named as the ‘Castle Curlew or EL Moro’.

A huge and tall fortification surrounds the entire fort area, which is of a length of 2828 feet and width of 89 feet. There are 11 large gates, of which four are outside from four different sides and the remaining 7 from inside. The outside fortification has 305 parapets for holding guns and canons, to stand against any enemy attack. All the gates exhibit the ancient Portuguese inscriptions.

Tourists have to trek their way up through the village and then climb up the rugged grassland to reach the Korlai fort, as there is no proper road. Old aged people or people with any knee problem are advised not to visit the fort. From Alibag main town buses as well as crazy Tum-Tum rides are available to the Korlai village. An individual Tum-Tum may cost Rs 200/-, but these rides are available on a shared basis at Rs 15-20/- per head. Just crossing the Revdanda bridge the Korlai village starts.

The walk along the sides of the paddy fields and small colourful row houses is unforgettable. The fort walls are along the edge of the cliff and post entering from the north gate travellers can get the view of the vast Arabian Sea, stretched out till eyes can see. From the south side the Korlai Lighthouse is visible at a distance. Few ancient water cisterns are visible within the fort which served as water reserves during fort lockdown. Few of the parapets still hold huge iron cannons, which are waiting their there as a silent spectator of the bygone era. 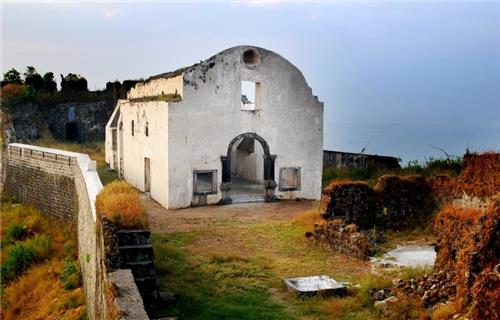 At the southern end of the fort complex stands some remnants of an old Portuguese church with a small statue of Lord Jesus in the middle. Proof of rain water harvesting can be seen through an age old relic of the in house harvesting system.

The rest of the fort structures are mostly in dilapidated condition and the entire compound has been covered with high grass. It is advisable to wear boots on an expedition to the fort as presence of snakes cannot be denied. Monsoon is the season when one should avoid visit to Korlai Fort. From the side of the fort there are small narrow stairs along the hillside, from where one can climb down to the Korlai beach below. This descend can be a bit tricky and one should carefully climb down the stairs to avoid any accident.

From the southern gate of the fort travellers can visit the Korlai Lighthouse which is still in operation. The way to this lighthouse is a very narrow winding road along the coast cut through the hill ‘Morro de Chaul’. One can directly trek from the Korlai village at the foothill to this lighthouse. The tall lighthouse stands amidst a well maintained compound with a neatly decorated garden on all sides. On entering the compound the gigantic satellite dish is visible at the top of a huge steel structure with arrows pointing north, south, east and west on the top.

A tour inside the lighthouse may cost around Rs 10/- per person and camera cost can be of Rs 20/-. 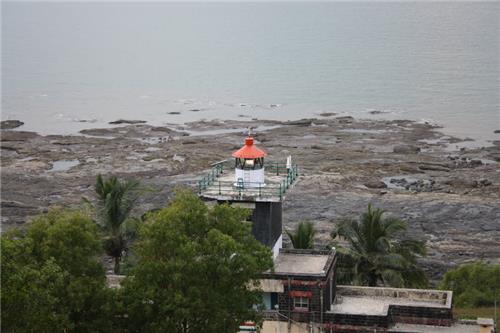 There is no formal ticket for this tour and the price may slightly vary as per the caretaker present. A spiral staircase leads to the top of the lighthouse where visitors can view the radar and telescope still used by the Shipping Ministry of Delhi.

The Korlai lighthouse is a fully automated lighthouse which was built in 1955. To provide uninterrupted service the Shipping Ministry has arranged for 4 backups for this lighthouse. The top radar keeps a track of the surrounding sea and constantly takes pictures which get directly transmitted to the coastal guards via satellite. The position of the Korlai lighthouse is critical and is under the administration of the Indian Navy and National Coast Guard.

The ariel view of the vast ocean on one side and the Korlai Fort on the other is worth capturing in camera. It is advisable not to climb to the top if you're facing vertigo, but after a long trek the view of the entire Korlai and surrounding valley along with the cool sea breeze is simply mesmerizing, something you cannot miss at all.