The 300 years old coastal town of the Marathas, Alibag is the headquarters of the Raigad district of Maharashtra. The town is popular among tourists for its sunny beaches and historical forts which stand portraying their architectural brilliance. This region has got quite a few forts of the past times and most of them are near to the sea.

The Kolaba or Kulaba Fort is the main fort of the region which was also the reason of Maratha rule on the entire south Konkan belt. The huge fort structure is stretched over an area of 275m from north to south and 100m from east to west. It is about 112kms from Mumbai city and is a must tourist place. The word “Kulaba” means cape. The fort is so named as it is built in the Arabian Sea, 1-2kms from the shores of Alibag town.

This sea fort was built in the year 1680 under Maharaj Shivaji’s rule. Shivaji made this fort after the entire south Konkan came under his reign. The gigantic fortification was made with the intention of making this place the base of Maratha Navy. Huge naval ships were built inside the fort walls and it had huge armory containing advanced arms and ammunition.

This seafort was the centre of gallantry for the chief naval officer Sarkhel Kanhoji Angre, whom later Shivaji gifted this fort leading to the overall development of Alibag region. Soon after the construction of this huge fort Shivaji died and the region came under the rule of the Sarkhel Angre and his descendants. During their rule the fort structure got many modifications. Palaces were being built for the royal family, chief official houses and huge grain storage units were made inside the fort area. Due to the strong fortification of the Kolaba Fort it was impossible for the British and the Portuguese rulers to win over the land. The Angres ruled over this part of the land till 1840AD. 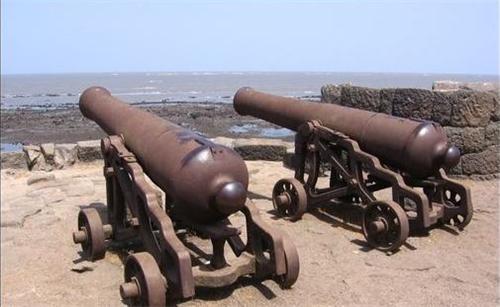 The average height of the fort walls is 25 feet or 6-8 metres and has a wide parapet circumnavigating the fort with 17 bastions for defensive fire at the time of any enemy attack. The entire fortification is being made with enormous stone blocks. There are two main entrances with one facing the sea and other the present Alibag town. The door facing land was known as the “Maha Darwaza” and it was the entrance for the royal family. These are teak wood doors with iron spikes embedded at many places.

The doors were engraved with beautiful pictures of various animals like tigers, lions and peacock. The entire stonework of the fort was being made without any lime content which is the reason for its longevity. Although a sea fort but there is large fresh water tanks inside the fort wall for consumption. The fort has its own dock outside the southern gate with two English canons projected from the parapets towards the open sea. These canons are still present and can be viewed by the tourists. At the centre of the fort area there is a big Ganapati temple built by Sarkhel Kanhoji.

To visit the fort area tourists can avail boat rides during high tides or can walk down or take bullock cart rides during low tides. Once at Alibag you will get surprised seeing the huge fort inside the ocean and wonder about the marvelous architecture.