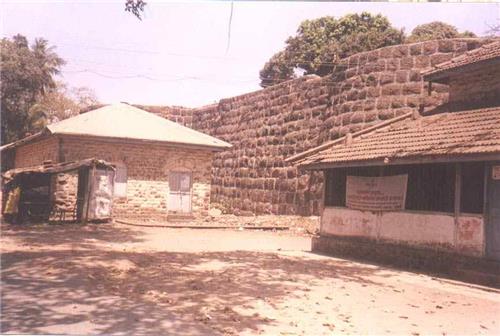 The Hirakot is a historically important fort structure built by the valiant Sarkhel Kanhoji Angre in the year 1720. Located at the north-western part of the Alibag town, just about 100 yards from Alibag beach, this huge compound is one of the largest building of the Raigad district. This fort is built up of big blocks of black Bassalt rock which gives it a shiny look. This is the reason that the locals have named it as “The Diamond Fort”.

During 1720, Kanhoji Angre built Hirakot with the intention of safe keeping of the accumulated treasure of his kingdom. For this reason, the fort has very high and sturdy walls on all sides. During 1740, parts of Alibag saw great battle between Peshawa Balaji Bajirao and his half brother Sambhaji, the son of Shivaji. Kanhoji Angre played as an ally to the young Balaji, who defeated his half brother after killing more than thirty men of his troop and took Sambhaji as a prisoner. Hirakot provided safe refuge to Balaji Bajirao and his troops.

During the eighteenth century, Hirakot fort was under the rule of Anandibai, the sister of Kanhoji Angre. In 1793, Jayasing the great Maratha, attacked Hirakot but could not break through the fortified walls and suffered a huge loss on war front. After Anandibai’s death, Maharaja Jayasing took over Hirakot and its surrounding area. Baburao, the chief-in-commander of the Shinde dynasty, tricked Jayasing, killed him along with his men and took over the Hirakot command some time later. But his tenure was short lived as Jayasing’s eldest son re-conquered the fort and the present Raigad district area (earlier Kolaba state) in 1807, bringing the rule back to the Angres.

Till 1840, Hirakot along with the entire Kolaba state remained under Angre rule, finally giving away the throne to the British government.

Present Conditions of the Hirakot Fort

Hirakot fort has been converted to a modern Jail or prison under the Government of India. The fortification still is so strong that it is impossible for anyone to enter or exit easily. A visit to Alibag, one should not miss the beautiful black structure of Hirakot. The main doorway is a huge one with carved wooden door and a small temple of Lord Ganesha on the left. The entrance to this area is restricted due to the present prison formation. By the side of this huge structure is the Hirakot Lake, which is an enormous water body and maintained by the municipality. Boat rides are available on this lake. Small and manicured garden surround the entire lake region.