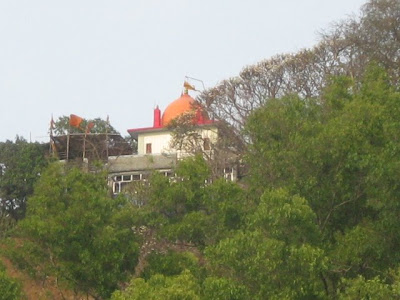 There is probably no place in India where you do not find a temple. Indians are in general God fearing people and that is reflected in the land’s history. Many temples big and small, ancient and new are scattered in various parts of our country with age old idols in them or modern day new idols. Many temples are now in ruins, but the deity over there is still worshipped with lots of respect and devotion. Alibag is also not out of this system and the coastal town and its surroundings are covered with many devoutly religious temples. Datta Mandir is one of them and is considered as one of the oldest temple of the region.

The Datta Mandir (Temple) is situated on a small hillock at Chaul, which is around 15 kilo meters from Alibag town of Maharashtra. Chaul is a quaint valley which is just beside Akshi and Nagaon village of Raigad district. The hillock is just beside this valley and a drive through this picturesque valley of Chaul is worth paying a visit. Devotees have to climb a flight of 700 – 800 stairs along the side of this hillock to reach the temple, which is placed on the top. The staircase is very well maintained and well spaced so that people can climb up with ease. There are sitting arrangements made out of the mountain on both sides of this staircase with many small stalls of water, fruit juice and coconut, so that the trek doesn’t make one too weary. The hill is covered with various trees which make most of the climbing route shady and the soothing climate makes the temple visit pleasant.

Once to the top, the amazing temple complex along with the atmosphere and the surrounding natural beauty makes you forget all the exhaustion. The Datta Mandir is a relatively new temple built by the Rashtriya Chemicals and Fertilizers (RCF) in memory of Lord Dattatreya. Lord Dattatreya is believed by some as the incarnation of Lord Shiva and by some as the Adi-Guru (First Teacher) of the Nathas. The temple complex is not very big with the main sanctorum containing a pair of Lord Dattatreya’s “Padukas” (footwear) on a black stone. Just behind this stone is the main idol of the Lord with three faces who here represents the main “Trimurti” of Hindu religion, the Brahma, Vishnu and Maheshwar. The temple is clean and people can take part in the “Aarti” that takes place everyday. On the way up to this main temple people can find out many small temples various other Gods and Goddesses.

While one reaches the top, tourists can find shops selling different puja items, pictures of the main deity and many other small souvenirs like utensils and toys. Many shops are found selling fresh lime juices. The ariel view of the surrounding valley from the hill top is perfect for shutterbugs. It is advisable to go to the Datta Mandir during the winters when the weather is cool. Summer months can be a bit hot and monsoons are not safe as the staircase to the top can become slippery and wet.


Explore more about Tourism in Alibag